With budget savings a key focus in today’s government, federal agencies are being asked to do more with less. However, fewer resources does not mean that the level of service can be diminished. Rather, agencies need to discover ways to enable efficiency and communication in order to achieve their goals.

Fortunately, as we make headway into 2014, cloud computing and virtualization providers are making tremendous strides towards helping agencies standardize and consolidate IT infrastructure to meet the need for enhanced savings, efficiencies and effectiveness.

Through a pilot program launched in December 2013, the Defense Information Systems Agency (DISA) is implementing a cloud security model developed for the Department of Defense (DoD). The goal is to better organize how various DoD partners and service providers can begin the process of utilizing cloud computing services for better efficiency and innovation.

In a recent FCW article, former Department of Homeland Security (DHC) CIO Richard Spires pointed out that “a key component of an agency’s IT infrastructure strategy should be leveraging cloud computing capabilities—private clouds hosted at government data centers or at a vendor’s facility, together with public cloud services.”

And clearly, momentum is picking up for cloud computing in the government.

For example, SRA International added a service called Stratify in September 2013 to help federal agencies manage security concerns when moving to the cloud. 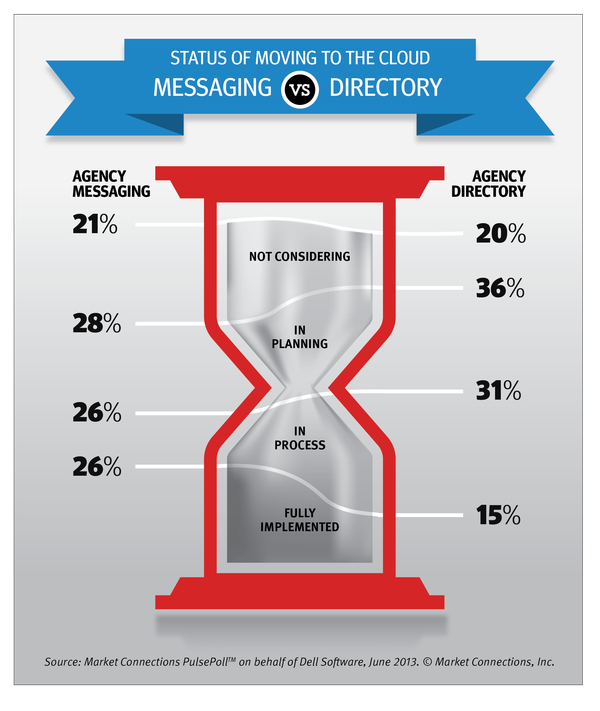 Fifty two percent of agencies are in the process or have fully implemented messaging in the cloud.

Dell Software and Market Connections, Inc. released a PulsePoll™ and white paper last August suggesting federal agencies can save millions in lost productivity and protect against cyber security threats by moving messaging and directory services to the cloud. The research of federal civilian and defense agencies showed that while less than a quarter of agencies had moved messaging and directory services to the cloud, more than half are in planning stages or in the process of moving to the cloud.

In addition, Laurel, Maryland based Aquilent has benefitted from a contract that helps federal agencies that are moving to the cloud. This was awarded on the heels of the announcement in August 2013 that Amazon Web Services won a $600 million contract with the CIA for cloud-based services.

Spires also noted that a move toward cloud computing would lower capital costs and the results can be easily analyzed to determine its effectiveness. After all, virtualized IT environments do not rely on the need for as many physical data centers and can enhance flexibility and efficiency.

Another agency adopting a virtual environment amid budget cuts is the U.S. Army. The Army needs to be ready at all times, which can present a problem when the necessary training and resources are cut. The armed forces are now relying on simulation and virtualization to better prepare soldiers for combat situations.

Brig. Gen. Michael Lundy, deputy commanding general at the Army Combined Arms Center recently stated, “As we look to the future, we are going to transition … into the future holistic training environment, live synthetic. We want to get away from having multiple environments, virtual gaming and instruction, and go to one synthetic environment, get to a lower overhead and integrate the full operations process…according to the common operating picture.”

Furthermore, the Social Security Administration (SSA) has also jumped aboard the cloud computing trend. On January 14, SSA put out a request for information, seeking vendor input on the feasibility of building a private cloud.

After the Obama administration’s “Cloud First” memo was released in 2010, agencies have been moving in that direction, but the number is still relatively low.

As a recent survey pointed out, only 27 percent of agencies are implementing or planning to implement private clouds, and 8 percent say the same about public cloud services.”

Despite these lower numbers, agencies are beginning to implement cloud computing and virtualization as agencies can no longer afford massive technology costs. The “Cloud First” strategy identified approximately $20 billion in savings by shifting toward cloud computing, and agencies are taking notice, and so too should contractors.