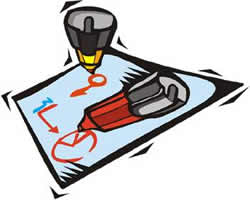 Most B2G and B2B marketers concur that advertising is an investment and often plays an important if not leading role in many campaigns.  Yet, with print ads, knowing which creative approach will resonate most effectively can be a challenge for even the most experienced marketers.

Pre-testing creative options prior to the start of the campaign can reveal important insights, thereby removing much of the guesswork from the creative development process.  Based on the results, you can make informed decisions on how to best evolve or enhance the most promising creative option.

You (or your ad agency) might wish to conduct ad pre-testing research at the creative concept stage and/or the copy and layout stage.  The creative concept stage, the very important first step in the development of new advertising, focuses on identifying the optimal approach for conveying the strategic message behind the ad.  Typically agencies or marketing departments create several different concepts for consideration, and each one should clearly represent the idea for the ad.

Though the concept may often be just a headline and a rough visual treatment, it can definitely be tested.  You can verify whether or not the ad concept expresses the underlying strategy,?? and then judge how well the audience understands and accepts it.  And, you can predict the target audience’s reaction to the basic idea which you want to use in the final ad.

Focus groups or in-depth interviews, both qualitative research methods, are very common at this stage in the game.  Though qualitative research isn’t statistically valid, it effectively garners the “whys” behind participants’ opinions and can be very useful for revealing major problems early, while there is still time to develop alternative approaches.

Once the best creative concept has been selected, testing will follow. This is often called copy pre-testing, meaning various permutations of the ad concept are tested with a larger audience prior to actually placing the advertising in the media.  Though it’s best to show both copy and layout, the most important elements are the headline and accompanying photo or illustration.

Though pre-testing of advertising has long been associated with the use of qualitative research, many marketers now also seek more quantified predictions of future ad performance before making their no/go decisions.  The direct rating method is a common quantitative approach; it asks respondents to rate alternative ads.  (These types of studies should always use multiple indicators of an ad’s effectiveness, rather than relying on just one.)  The direct ratings are used to evaluate an ad’s attention, read-through, believability, clarity, and more.  Though not a perfect science, a high rating certainly indicates a potentially more effective ad.

Certainly, using the internet for this type of testing can be faster and less expensive than in-person focus groups in some situations.  An obstacle, however, is the extent to which online samples are representative of your target audience.  We suggest a hybrid approach.

We do that by programming a site with the ad material to be tested.  Our telephone interviewers then contact, via random sampling, the target respondents.  Respondents are screened, asked to log on to the Web site, and the interviewers administer the questions while the respondents view the ads online.  For qualifying respondents who are not sitting in front of a computer when contacted, interviewers can schedule a call-back.

The level of involvement required on the part of the participant may require that a honorarium be provided to respondents who complete the survey.  However, the incentives can be significantly lower than what would be required for participants in a focus group.

The advertising can be tested either in rough or finished form.  The general purpose is to determine whether or not there are specific components of the ad (e.g., headline, copy, tagline, layout, photo, or illustration) that need to be altered or improved.  This is the time to determine what works and what doesn’t, what could work better; and to select the optimal ad (or series) for media placement.

Of course, quantitative benchmark studies are the surest means of ascertaining whether or not a marketing campaign,??  including the advertising component,?? actually moved the needle in terms of market awareness and desired attributes.  But, by testing your ads prior to placing them in targeted media, you’ll be much more likely to celebrate your benchmarking results.