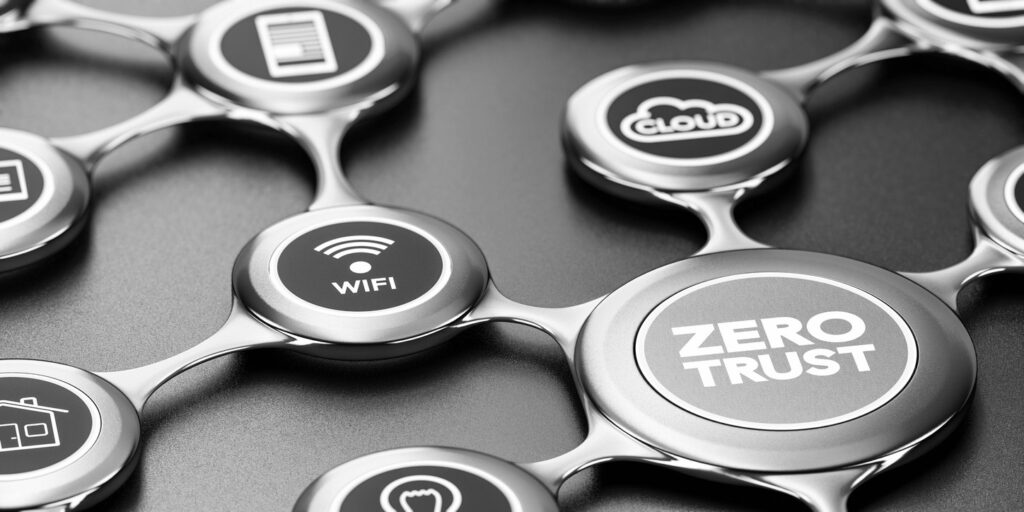 3D illustration of a blue network with icons and the text zero trust written on the front. Black background. Concept of secured network.

The telework phenomenon has been a tour de force in culture for over two years now.  We have all done our phishing courses, taken a multi-factor authentication approach to all Apps, and replied to the on again off again phish test emails. Like most of you, I have rolled my eyes at these here and there, balking at the absurdity of these “threats”, but the truth is, we’ve all been duped before.

The rapid shift of moving the physical working environment into a digital environment, combined with the adoption to telework, creates a litany of new endpoints and vulnerabilities to defend against—requiring a frequent review of our capability to remain ahead of our adversaries.

Cybersecurity is setting the stage as a government-wide top priority

Our survey respondents note that 84% of federal employees ranked cybersecurity as a very important to extremely important initiative, and 73% anticipate cybersecurity having a higher or much higher priority than it has today. 72% also report that they are always using two-step authentication in order to better secure their networks, a net positive step to better monitoring government networks.

We are witnessing first-hand a massive shift in mindset as to how the federal government conducts cyber practices, underpinned by President Biden’s Executive Order on Improving the Nation’s Cybersecurity released earlier this year. Among many additions, the executive order calls for the modernization and implementation of stronger cybersecurity standards across the federal government for information and operational technology. From cloud services to zero-trust architecture, federal agencies will continue to research methodologies and tools to meet the ever-evolving cyber battlefield.

A dispersed workforce has tested traditional perimeter security during the pandemic. As a result, the zero trust model is quickly emerging as a top cybersecurity focus across the federal government.

A GBC survey found that 75% of government employees think that zero trust is very or extremely important to their cybersecurity strategy. This indicates that not only is there widespread visibility, but also a large interest in zero trust in strategy setting moving forward. The importance of zero trust—combined with findings mentioned earlier that federal government employees believe they will be working remotely more frequently—indicates that zero trust will provide more value than ever before for the modern government workforce.

Whether a reprioritization of a familiar task like data management and cybersecurity, or the integration of emerging trends like widespread telework or zero trust architectures, it is safe to say the trends of 2022 will go on to shape government markets for years to come.

Click here to see part one of this three part series.

It should come as no surprise that refining data management was at the top of our technology trends to track for 2022. Over the past decade, the way that the Federal Government, Department of Defense, and even State & Local Government collect, analyze, and disseminate data has grown in complexity in a way that leadership may not have first thought possible.

The ever-evolving nature of data management technologies is a constant that the Federal Government is equipped to face in its goal to better serve the American people. There is however, a massive paradigm shift underway that could forever change the where of where data management work is done: telework.

Telework continues to bring value to the government workforce

With the pandemic, telework has grown out of its infancy phase and aims to play a large role in the shape & face of those in, and those outside supporting, the Federal Government’s mission.

We’re seeing a cultural shift in real time that could have long-lasting effects on government work policies for decades to come. A whopping 82% of federal employee respondents from a GBC survey note their belief that they will telework three days or more per week in the future, bucking a century-long trend of going into the office to work for the federal government.

GBC also found that 47% of public sector employees say remote work has, and will continue to have, a positive impact on their ability to conduct operations—a trend that GBC believes will continue to grow as the federal workforce continues to telework.

As the coronavirus continues to mutate and create new variants, we can expect to see increased pushbacks in return to office timelines and utilization of telework across the federal government. Now is the time to take advantage of the information gained from teleworking to better understand what federal agencies need for teleworking tools moving forward. The telework trend is here to stay.

Click here to see part one of this three part series.