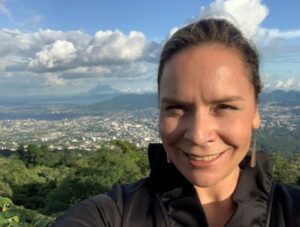 As we celebrate Hispanic Heritage Month, we want to highlight our Manager of Marketing and Client Services, Mari Canizales Coache. Mari has been with Market Connections since 2015, where she focuses on the brand and messaging of the company and supports the team by sharing her marketing perspective in the development of surveys and marketing assets for our clients.

With over 20 years of experience in marketing, Mari came to us after working among well-regarded non-profit and higher-ed institutions including: American Red Cross, National Wildlife Federation, The Sallie Mae Fund, College of Southern Maryland and The George Washington University. She is passionate about history, international affairs, diversity, equity and inclusion, wildlife, and the environment. All are, according to Mari, part of her roots and upbringing.

AH: Mari, tell us about your background?

MC: I came to the US from El Salvador with my family in late 1979. Because of my father’s military position, our family had been targeted with death and kidnapping threats from guerilla groups in our country at the start of its 10-year civil war. As a result, his superiors sent him to study at the Inter-American Defense College, here in DC. He was later appointed as the military attaché here at the Salvadoran embassy.

Once my family arrived in the country, my mother also found a position at the Inter-American Development Bank, and the family settled in the DC area. Her employer provided us many opportunities to visit El Salvador, our grandparents and extended family often. This was not only a blessing, but it helped us kids maintain a certain level of language and culture growing up.

AH: What was the hardest part of growing up an immigrant in the US?

MC: There was always a bit of a culture clash between what we experienced at school and with our friends and what we dealt with at home. There always felt like there was a bit of push and pull between the two.

Language was the first barrier I faced. My parents received a call from my kindergarten teachers concerned when I didn’t speak to them or my fellow classmates. They were surprised to find out the little girl with blond curls and green eyes did not speak a word of English. I did eventually learn, with the help of an in-class tutor, the parent of a fellow student. To this day, there are still words that do not come easily for me in English because I learned them in Spanish and vice versa.

Throughout my K-12 years, it was tough explaining situations at school and with extra-curricular activities to my parents who were also not accustomed to the American school system and processes. But most of all, I had a hard time “fitting in,” knowing that I was just a little bit different from my American friends at school. It was the American experience while I was at school, but when it came to our home life, it was like living in “little El Salvador.”

As I’ve gotten older, I continue to have a hard time identifying myself as part of one culture or another. Oftentimes I don’t feel “Latina” enough for family back in El Salvador or within certain circles of Hispanic friends, but I also do not feel “American” enough in other social or professional circles. This is especially true since I often “pass” (meaning I have very little-to no accent and look “white”) and people forget I am Latina.

It is a weird duality of cultures. I now understand why people use the hyphen between their background or country of origin and American. I do feel Salvadoran-American, inclusive of both worlds, but not really fitting in just one.

AH: How has your background shaped your career?

MC: With two parents working at international NGOs (after retiring from the military, my father also consulted for the Organization of American States), I really thought I would go into international affairs and diplomacy. I majored in International Relations at George Mason University, and even took some master’s level courses in Conflict Analysis and Resolution.

Like many marketers, I did not have marketing in mind when I began my career. My first job with National Wildlife Federation’s affinity travel program afforded me the opportunity to begin developing my marketing skills. It was there I envisioned and created the program’s first newsletter focused on international travel destinations, wildlife and conservation.

While my career path has been solidified in marketing, I have also been deeply involved in diversity, equity and inclusion (DEI) programs at companies I have worked for. This has included internal cultural competency development and training, as well as development of external-facing programs and materials. As a person who identifies as a minority, I appreciate the importance of DEI work.

It also helps that I am a native Spanish speaker and am fairly fluent in French!

MC: I definitely feel blessed to have been given the opportunity to grow up and be educated in the US, to have become a US citizen, while also having firm roots and a heart for El Salvador. The duality of who I am is often experienced by those of us who have immigrated to the US. My story is just one example of the vastly different immigrant experiences you can hear from those coming from Hispanic/Latin nations. I am thankful and fortunate that our family’s is one that has had much success in this country. I thank my parents for making the sacrifices they did and giving us this opportunity.

If there’s one thing, I want people to understand the richness and diversity within Hispanic/Latino cultures. Although we are often lumped into one ethnicity, we are not a homogenous group. We are diverse in language, dialects, race, history and culture. We have unique stories, all equally important to understand, regardless of class, country of origin, or reason for seeking the American dream.

AH: Thank you for sharing your personal story with us, and for providing insights into another aspect of Hispanic/Latino culture.

Link with Mari on LinkedIn or contact her at mcanizales@govexec.com. 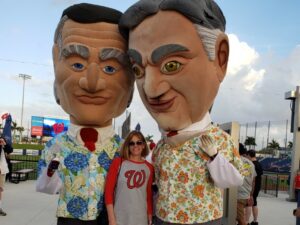