Over the past couple of weeks, we’ve shared how to take advantage of increased screen time among government audiences, as well as, how to effectively pivot your in-person meetings to virtual ones. Now we take a look at the pervasive online vehicle that only continues to grow in influence: social media. In addition to your own website and public sector media channels, social media is essential to reaching your target audiences.

According to our latest Federal Media & Marketing Study (FMMS), on average, nearly one-third of federal employees are spending 15 minutes or more on social media. It’s no surprise the top two social sites among feds are Facebook and LinkedIn with 4 out of 10 alone visiting Facebook daily. As government employees are tethered more to their computer, we expect these numbers to climb and the lines of personal and professional social media usage to blur even further.

The old adage of not being able to reach the public sector through social media no longer holds water. Whether it’s via professional social media channels (approximately 2.1 million federal employees are on LinkedIn), or the increased ability to view social media on personal devices, social media marketing should be a key part of your overall marketing mix.

Our Content Marketing Review highlights that the professional value of social media goes beyond just traditional awareness building. Nearly half of federal decision-makers and 7 out of 10 state and local decision-makers found professionally based LinkedIn and LinkedIn communities useful portals for accessing content for educational purposes. The efficacy of social media to deliver content even bled over to the traditionally personal social realm. One-quarter of federal and over half of state and local decision-makers felt Facebook and Twitter were also useful sources for work-related content.

Using social media can help you not only place you in front of your audiences, but also drive traffic to the content you’ve placed on other channels to help increase visibility and lead generation. It also allows others to help you drive traffic by making it shareable.

How can we help? 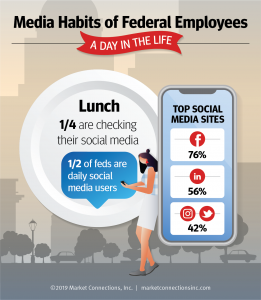